The Making of Ammonia

The Making of Ammonia


The making of ammonia is one of the most important processes in the chemical industry.

It is an essential ingredient in the manufacture of fertilizers, explosives, and many other chemicals and products along with being used for refrigeration.

In the 19th and early 20th century the largest supply of ammonia came from guano deposits (sea gull droppings) along the coast of Chile. Although some ammonia was made by the destructive distillation of coal and other processes, these were not economical at the time.

The research for an economical method for producing ammonia began not due to the need for fertilizer but because of the necessity of explosives and munitions for war.

The development of this economical method was developed by the German chemist Haber Fritz in 1913 and adapted to commercial use by another German chemist Karl Bosch. Thus the name of the process became the Haber-Bosch process. This procedure is a form of "nitrogen fixation"

Nitrogen fixation is a process of combining atmospheric nitrogen with hydrogen to form ammonia. This is done in the presence of a metallic catalyst (iron) at high temperature and high pressure.

The nitrogen for this process comes from the air and the hydrogen comes from a process of breaking down methane (natural gas). 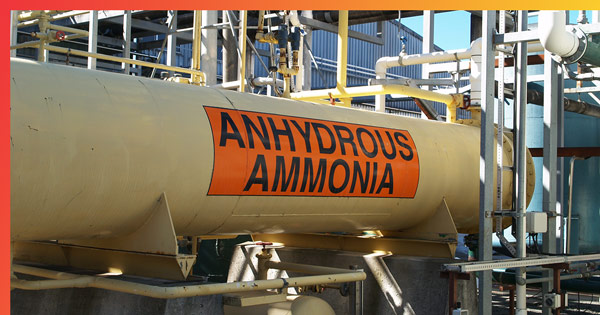 Our team is standing by to help with your ammonia safety management needs.